“Being able to communicate effectively and building a comfort level with one another is key. Things evolve and solutions come from listening to what’s working—and what’s not working.”

Craig Babyak studied sports biology at Springfield College as a stepping stone to a career in the medical field. Lectures on health care professions were a regular occurrence, and a presentation by a prosthetist from Shriners Hospitals for Children sparked his interest. A yearlong internship at a prosthetic and orthotic lab after college solidified his career choice. Confident in his decision, Craig completed graduate school at Northwestern University Medical School and earned his dual certification as a prosthetist orthotist. He began practicing in the Springfield area in 1994 where he worked with fellow Northwestern alum Christian Rogers. After gaining experience in the field, the two shared a dream of starting their own company. They opened Prosthetic & Orthotic Solutions in 2006, building the company from the ground up. 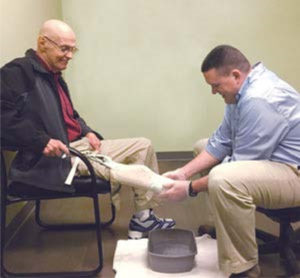 Having certification in both prosthetics and orthotics provides Craig with a diverse patient population, and he enjoys the variety this brings. Fabricating orthotics for pediatric patients allows him to support children during their critical growing years, while his work with geriatric patients is equally rewarding. With this population, the devices he builds are often focused on restoring function, such as after a patient has had a stroke.

As owner and practitioner, Craig approaches every decision with his patients’ best interests at the forefront. The first step in making decisions is listening. His patients often have chronic symptoms from diseases over many years that require repeated devices and follow-ups.

“Being able to communicate effectively and building a comfort level with one another is key. Things evolve and solutions come from listening to what’s working – and what’s not working,” says Craig.

The selection of a device, brace, or component is always based on what is most appropriate for each patient. It is not unusual for patients to come with a generic prescription for a device. What works for one patient may not work for another. Craig is proud that his company is committed to offering choices and making decisions based on function and durability, rather than on what is dictated by insurance.

Reflecting on his company’s values, Craig emphasizes, “We are all appreciative of our patients. We know they have a choice and we wouldn’t be in existence without them. There is pride in knowing people take a chance on you and are happy.”

*Between Memorial Day and Labor Day will be open 8AM-5PM on Fridays!