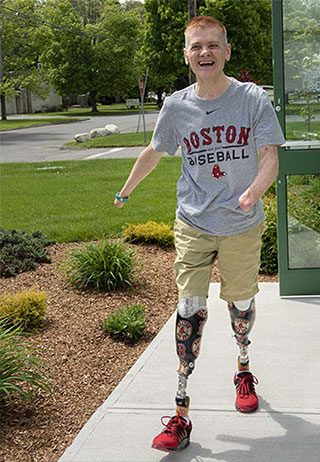 The circumstances that lead to amputation are different for each person. For John, the journey was not a gradual one that afforded time to prepare and adjust to the idea.
“I didn’t know what I had, I woke up to it,” he says, outlining a series of events that nearly took his life and required amputation of his lower legs and both hands.

In February 2014, John contracted a virus that spiraled into a life-threatening situation. Hospitalized for pneumonia and bronchitis, sepsis took hold and went haywire. When a person becomes septic, the body is fighting a severe infection. Circulation can be impacted, especially to the extremities. John survived weeks on life support and when he awoke from a coma on March 13, 2014, the tissue in his hands and feet had begun to die and showed signs of gangrene. Amputation was a necessity.

How does a person begin to process this and move forward?

“You gotta face it, turn around, and be positive again. You have to fight. You have to make it a challenge not a barrier, get out there and get over the speed bumps. You can become the person who used to be strong again. Rebuild, regain, reconnect,” says John.

Before his amputations, John was a professional dancer and dance teacher. Always on the go, his career depended on physical fitness and he was part of an active community that shared his passion. Anyone who spends just a few minutes talking with him will see that a positive attitude, hunger for exercise, and desire to motivate others fed his soul before and continues to do so today.

“I’m not done yet!” John proclaims.

The Road to Recovery

John’s feet were amputated in April of 2014, and his hands a month later. In April of 2015, he had to return to have his legs further amputated at the knee. Chris Rogers, CP, at Prosthetic & Orthotic Solutions, made John his first pair of prosthetic legs in July of 2015 and they have been working together since then.

Having gone 15 months without the ability to walk, John will always remember the day Chris gave him his first prostheses.

“It was a gift to be on them,” he says, and he hasn’t stopped putting in the hard work. Always one to push the limits, he has also realized the importance of setting realistic goals.

“It’s like a journey that never stops. Chris is here because he cares about people. He listens to me and I listen to him.” 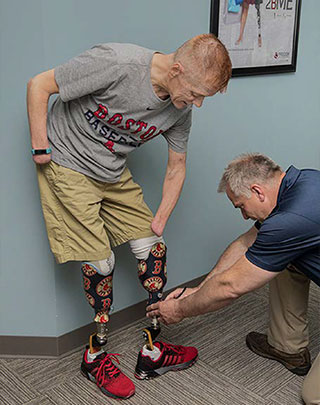 “You get injured when you fly too fast,” he says with a wink.

The relationship he has with Chris keeps him focused on achieving his goals and then setting new ones. “It’s like a journey that never stops. Chris is here because he cares about people. He listens to me and I listen to him. He will do exactly what I need to have happen for me and make it safe for me to go out in this mad world! I think I put gray hair on his head because I’m always asking, ‘When is it time for something new?’”

With his prosthetic legs, he has been able to reconnect with the dance world that he loves so much. He is coaching and critiquing students and traveling to competitions. On a recent visit to our office, he had just come from teaching a bride and her father, and the bride and her groom, the dances they will perform at her wedding.

Whenever something needs adjusting, he can count on Chris and the team at Prosthetic & Orthotic Solutions, to take care of him so his downtime is minimized.

“I just call and they get me in here as soon as possible,” he says.

This is hugely important when issues arise that cause discomfort. Skin irritations can happen from time to time, and treating them promptly is essential to limit complications. John experienced this when he developed water blisters on his right leg. Chris and Brittany Rhodes, our newest team member, redesigned his socket to allow his wound to heal.

John’s experience as a coach and openness about his life make him a natural mentor. Not one to shy away from motivating others, he connects with amputees in support groups, both in person and online. He remembers a conversation with a woman in a rehabilitation center who wanted to go back to her choir group but didn’t want to be seen with her leg missing.

“I told her, ‘People are waiting for you, they are looking for you. You are going to be put back together. Your new leg is going to feel odd at first, but it’s also going to be the best thing you’ve ever done.’”

John also seizes opportunities to educate others who are unfamiliar with amputation and conditions, like sepsis, that can lead to amputation. On a train ride into Boston to see a Red Sox game, he noticed a 4-year-old boy eyeballing him. He could see the wheels turning in the boy’s head. Anticipating the questions the boy’s father would be asked on the way home, John initiated a conversation with them. By reaching out, John helped put them at ease and likely impacted how that little boy will approach others in the future.

Laughing, John recalls, “The boy said, ‘You’re really cool! Are you like a robot?’ and I joked, ‘No, but I do get charged up!’”

There is a quote that says, “Life isn’t about waiting for the storm to pass, it’s about learning to dance in the rain.” John could not be a more perfect example of this approach to life, having faced a storm few of us will weather.

“There is adaptable equipment to make yourself advance. It can sit there or you can commit yourself to the challenge, achieve, and then do more,” he says.

What is John aiming for next? Well, for starters he is researching feet that will help him tap dance again. He wants to ride a bike that has foot brakes, horseback ride, ice skate, and if that’s not enough, in a few years he hopes to celebrate his 60th birthday by skydiving!

*Between Memorial Day and Labor Day will be open 8AM-5PM on Fridays!